Start with Why to Inspire Action 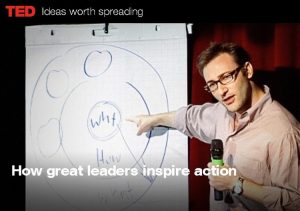 A simple but powerful model for leadership in Simon Sinek’s TED Talk inspired millions of people around the world. About 40 mln views. Based on great examples of Apple, Martin Luther King, and the Wright brothers, leadership expert shows us how powerful can be the question “Why?”

Why some companies become leaders in innovation?

Like Apple, year after year, after year? What do they do differently from other computer companies?

Why Martin Luther King became one of the greatest leaders and headed the Civil Rights Movement? He wasn’t the only great orator of that time, but his speech “I have a dream” became one of the most inspiring in history. Why him?

Simon Sinek made a discovery that profoundly changed his view on how the world works. He discovered a pattern. As it turns out, all the great inspiring leaders and organizations in the world, including Apple, Martin Luther King and the Wright brothers, they all think, act and communicate the exact same way. And it’s completely opposite to everyone else approach. This simple idea Sinek called the golden circle.

This little idea explains why some organizations and some leaders are able to inspire where others aren’t.

People don’t buy what you do; people buy WHY you do it.

* you can turn on subtitles to understand Simon Sinek’s TED Talk in 47 languages.

To be a leader necessarily includes this: to inspire. Whether leaders are individuals or organizations, we follow those who lead, not because we have to, but because we want to.

We follow those who lead, not for them, but for ourselves. And it’s those who start with “why” that have the ability to inspire those around them or find others who inspire them.